What is On-Demand Music Streaming?

What is Non-Interactive Music Streaming?

Why We Wrote This Guide

According to Neilsen’s 2020 Total Audience Report, Working from Home Special Edition, people indicated that the number one type of TV and streaming content viewed while working from home was news. Thirty-three percent of people listen to their news updates on a music radio station and 28% of people listen to a public radio station for their news. This highlights the diversity of radio’s program offerings and radio’s resiliency even during COVID-19.

Results from our 2020 Music Industry Report show that 33.3% of respondents discover new music from AM/FM Radio and 25.1% indicated that they discover new music from Satellite radio. Additionally, in response to “how do you usually listen to music?” 36% of respondents listen to AM/FM radio—the second-highest response behind only Spotify. Nearly 25%listen to SiriusXM (satellite radio) and 11.2% listen to Pandora. Additionally, satellite radios have become much more prominent as 75% of all new vehicles in the U.S. sold after 2016 have satellite radio installed. Also, with the continued rise and prevalence of computers, tablets and smartphones, Internet radio has also seen steady growth.

Though it may seem like interactive streaming is the sole form of music consumption today, research and data show that non-interactive streaming is still very relevant. Given the popularity of this form of music consumption, its rapid growth since the beginning of the 21st century, and its huge potential to provide new and existing sources of royalties, any interested party should seek to understand the ins and outs of non-interactive music streaming and their implications for the future of the music industry.


What Is “Non-Interactive” Music Streaming?

Both “webcasting” and “Internet radio” are terms used in reference to non-interactive music streaming; however, the term “webcasting” can be defined as a broadcast over the Internet from a single content source to many simultaneous listeners. Therefore, webcasting also technically applies to on-demand streaming. In this guide, however, “webcaster” will primarily be used to refer to non-interactive streaming services. Internet Radio can be defined as a digital audio service transmitted over the Internet. Internet Radio presents listeners with a continuous audio stream of songs which, in the case of non-interactive music streaming, cannot be skipped or replayed, similar to traditional broadcast media like AM/FM radio.

The most important thing to remember about non-interactive music streaming is its namesake: the Digital Service Provider (DSP) does not allow you to skip, rewind, skip forward, or know the playlist of songs ahead of time. You may only “tune in.” 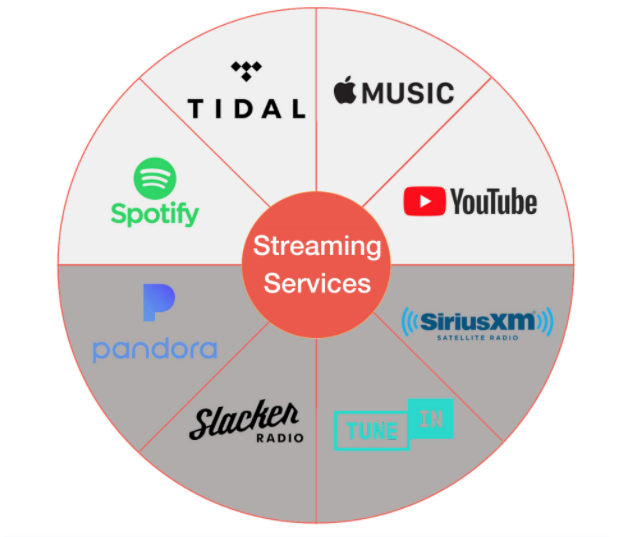 In order for a webcaster to broadcast a non-interactive stream on its platform, the webcaster must obtain a license from both the sound recording copyright owner and the underlying composition copyright owner.

License to Webcast the Underlying Composition

Webcasters must obtain a license to publicly perform the underlying composition over the Internet from a performance rights organization, just as they would need to obtain a similar license for traditional broadcasting (AM/FM radio, TV broadcasts, etc.).

Under the proper license, a webcaster obtains the right to transmit the composition as an audio stream over the Internet on approved sites. In addition, the webcaster may digitally encode, reproduce, archive, and copy the composition solely for the digital broadcasting purposes specified in the license.

License to Webcast the Sound Recording

In the United States, webcasters must obtain a sound recording license directly from SoundExchange The website directs service providers to identify and obtain the proper license.

Occasionally, smaller stations will forget to obtain a license for use of the sound recordingfrom SoundExchange. To combat this, SoundExchange now distributes warning letters to webcasters who are streaming without a license. The Federal Communications Commission (FCC) can fine DSPs which are not properly licensed, so it is mandatory for webcasters to obtain a sound recording license.

A stipulation within most webcaster agreements requires the webcaster to report the usage of all copyrights in a given time period; however, certain educational stations are permitted to waive this requirement if they have fewer than 55,000 monthly Aggregate Tuning Hours (ATH). ATH is a unit of measurement for audience size equal to a period of time in hours multiplied by the average number of listeners during that period of time.

Public Performance Royalties for Use of the Sound Recording Copyright

The Digital Performance Right in Sound Recordings Act of 1995 and the Digital Millennium Copyright Act of 1998 grant a public performance right to the record label and recording artists when a sound recording is transmitted via digital audio transmission and/or webcast. Previously, only music publishers and songwriters could collect performance royalties from terrestrial or digital broadcasts in the United States.

A Compulsory License for Public Performance

The Digital Millennium Copyright Act of 1998 also included a provision that granted webcasters a compulsory license to use sound recordings, meaning if a webcaster meets certain requirements, the owner of the sound recording is legally required to allow its public performance on the webcast for a negotiated fee.

To qualify for a compulsory license, a DSP must be non-interactive. It must not release an advanced notice of which songs it will play next. A number of other requirements restrict the number and type of plays webcasted by the DSP, including:

*Permitted violations of the performance compliment include 1.) If the service has received specific waivers from the owner of the sound recording copyright 2.) unintended violation of these limitations (if corrected) will not cause a service to be ineligible for statutory licensing

The webcaster is required to register with the U.S. Copyright Office by filing a Notice of Use of Sound Recordings and comply with Sections 112 and 114 of the Copyright Act. The process for obtaining a Statutory License is as follows:

1. You must first notify sound recording copyright owners by filing a Notice of Use of Sound Recordings Under Statutory License (“Notice of Use”) with the Copyright Office.


a. All services must file a Notice of Use prior to making the first ephemeral copy or first digital transmission of a sound recording to avoid being subject to liability for copyright infringement.

2. Send a $50 filing fee should be sent to the Copyright Royalty Board at the U.S. Copyright Office (address located on the form).


a. Once a service files its Notice of Use, it may commence making digital audio transmissions, provided that it complies with all of the terms and conditions of the statutory license, makes all payments, and files all statements of account and reports of use when due.

After the 1998 provision, several years of negotiations and rate-setting procedures between webcasters and record labels ensued. Some argued that certain proposed royalty rates disadvantaged independent Internet-only radio stations, and would eventually drive them out of business. These disagreements eventually culminated in a “Day of Silence” during which U.S. broadcasters shut off their audio streams or played ambient sound in order to focus attention on the consequences of the increasing rates.

In 2007, the Copyright Royalty Board (CRB) set a statutory royalty rate: $0.0008 per play/per listener for 2006, which would gradually increase to $0.0019 in 2010. The CRB gave smaller webcasters the option to pay a percentage of their gross revenues or a percentage of their expenses, whichever was greater.

Then, in 2008, Congress passed the Webcaster Settlement Act, which allowed the music industry to negotiate its own rates for webcasting annually. SoundExchange, the only organization allowed to collect performance royalties from webcasters (according to Sections 112 and 114 of the U.S. Copyright Act), now had the authority to negotiate private agreements with webcasters that differ from the rates and terms set by the CRB. The Webcaster Settlement Act also specifies that SoundExchange must offer a license on whatever terms it negotiates to any webcaster wishing to use them. SoundExchange is also entered into collection agreements with more than forty other counterpart organizations allowing them to pay out royalties generated from foreign streams.

To understand royalty rates, it is imperative to understand the various types of webcasters broadcasting music over the Internet. Note that not every one of the DSPs listed below pertains to non-interactive music streaming. Note also that each type of DSP is not mutually exclusive. For example, a Small Webcaster could also be both a Pureplay Webcaster AND a Commercial Webcaster depending on its business structure.

Within the category of commercial “pureplay” webcasters (the most common type of DSP in the world of non-interactive music streaming), three rate classes exist, each with its own unique SoundExchange license fee.

All royalties received by SoundExchange as a result of the compulsory license are distributed according to the following breakdown:

In 2012, SoundExchange distributed over $300 million to copyright owners. To collect Royalties from SoundExchange you should sign up directly on their website, register your sound recordings, and claim Featured Artist Share.

Royalties to the Music Publisher / Songwriters

The Performing Rights Organizations of the United States—ASCAP, BMI, SESAC, and GMR—offer standard licenses that permit webcasters to perform all the compositions in each organization’s repertoire, regardless of file format.


The big industry players (Sirius XM, Rhapsody, iHeartRadio, Pandora, among others) do not accept standard license agreements and instead negotiate their own specific deals with each performing rights organization.

ASCAP and BMI are governed by consent decrees, defined by the Future of Music Coalition as “limitations agreed upon by parties in response to regulatory concerns over potential or actual market abuses.” Under the consent decrees enforced by the U.S. Government, ASCAP and BMI must give identical terms to webcasters. These licenses remain non-exclusive, however, and the individual members of either PRO still maintain the right to individually license their selected works.

If ASCAP or BMI cannot agree with a webcaster regarding fees or terms of the agreement, a rate court judge determines all terms and fees after a trial of the facts.

For example, if SiriusXM cannot agree with ASCAP regarding which rates will be paid to the PRO for use of the underlying composition, a rate court judge will make this determination, as specified by the consent decrees.

Webcasters still possess the right to voluntarily agree to terms and fees with ASCAP and BMI outside any judicial involvement, and they often choose to do so.

Want to use this guide for something other than personal reading? Good news: you can, as long as your use isn’t commercial and you give Exploration credit.

This work is licensed under a Creative Commons Attribution-NonCommercial 4.0 International License.

What is On-Demand Music Streaming?